As we make our next game Dangerous Driving we’ve been having a lot of discussions about what our all time favourite racing games are.

Alex, our Creative Director, has been responsible for a fair few racing games himself (the entire Burnout series, Need for Speed Hot Pursuit and Need for Speed Most Wanted).

Here he talks about one of his all time favourite racing games:

My all time favourite racing games are probably all coin-operate arcade games from the late 1980’s and early to mid 1990’s. This really was an incredible time for fans of the genre. If you wanted to ‘see the future’ then you had to visit an arcade. There you could play fast 3D games running on dedicated hardware that seemed light years ahead of anything that a home microcomputer or early Japanese games console could offer. If they had a steering wheel that vibrated, or a chair that moved up and down underneath you as you played then that was an incredible bonus on top!

I first encountered “OutRun” early in the Summer of 1987. Most of the UK gaming magazines had printed screenshots of the game, showing a level of graphic detail that was incredible. What no magazine could ever really convey were two things. 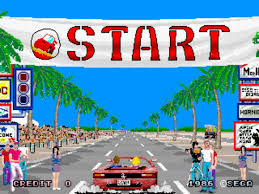 One was the sense of the speed, an incredible sense of speed that was unrivalled by anything else around at the time. Sega’s ‘sprite scaler’ effect was a revelation and everyone really thought these were actual realistic visuals the likes of which we’d never seen before. 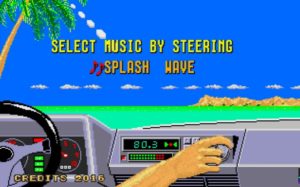 The second was the music. It was the first game I’d ever seen that allowed you to choose the music that played whilst you drove. Just like playing a favourite song on a car radio. On top of that, the tunes were catchy and seemed to fit perfectly with the beautiful blue skies look of the game. All of Sega’s arcade cabinets had excellent loudspeakers and subwoofer. This audio hardware always helped you find the game. You can also hear the welcoming chime when you inserted a coin above almost anything else happening in the arcade. All arcade games featured what was called ‘the attract mode’ – this was the silent (but not always) visual loop that played when no-one was playing. Sega’s machine showed the iconic ‘orange sunset’ high score tables and the game logo.

Playing this game always put a smile on my face. It was supremely fast, highly addictive, looked amazing and sounded incredible. To me, it perfectly encapsulated everything that a great arcade game should be. And I’ll let you into a secret…32 years later and I’m still playing it. And I’ve never genuinely finished it either.

Tell us what are your all time favourites?

Mail us here hello@threefieldsentertainment.com. We love hearing from our fans.