We are currently making a brand new racing game called Dangerous Driving due for release this Winter. Inevitably that means we get to talking about games of old and in particular what are our favourite racing games of all time. Last week Creative Director, Alex wrote about one of his all-time racing games, Outrun.

It’s time to delve back in time and talk about another highlight:

“Virtua Racing” hit UK arcades in the Autumn of 1992. In my mind I often think that it was the follow on game to “Virtua Fighter” – but looking back, “Virtua Racing” emerged a whole year before, and was an eagerly awaited follow up to Sega’s incredible “Super Monaco GP” machine. But this time, things were different.

Powered by a new 3D graphic board known as “Model 1” this was Sega’s first game that ushered in the use of polygons over sprites to create the visuals in the game. They were not the first, Namco had beaten them to it a few years before. First with “Winning Run” and later with “Driver’s Eyes.” But Sega were back with a vengeance and “Virtua Racing” was a revelation.

This was maybe the first time I’d played a game which enabled me to switch between camera views (by pressing a series of brightly coloured “V.R.” buttons) as I drove. The cockpit view really did offer ‘a virtual reality’ experience – but I found I could get further in the game using the higher camera view. I was a University student at the time, and spent every lunchtime loitering in the student union arcade watching people have a few credits on different machines. You can learn a lot about a game from watching a wide range of players try the machine. You can also get an understanding of how each machine was set to defeat the player after about two minutes of play had elapsed.

The “Super Monaco GP” machine was located right in the centre – it’s white and red fibreglass surround and huge six speaker surround system booming out the sounds of the engines and the crowd. This game took money fast and was 50p per play. It was there that someone told me that a local snooker club at the edge of town had just taken delivery of “Virtua Racing.” 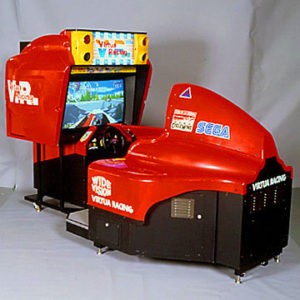 That evening I headed down there with a friend of mine called Stefan who was also interested in the latest arcade technology. Peering into the entrance doors, we could see the machine sitting there unused. It was brand new and looked like it hadn’t even been played. It was a Members Only club so we had to pay £2 each time we went in – and we were only going there to put money into the Sega coin-op machine. We’d come prepared though. Each credit was a whopping £1 per play – a big step up from the usual 30p a credit, or 50p for a “new game.” I’d read that Yu Suzuki drove Ferraris – and it was slowly dawning on me where he was getting his money from!

There was free tea and coffee inside and we both cautiously watched the attract mode for about half an hour before each dropping the first credit. The cockpit was snug and the steering wheel and gear shift felt brand new. There was no loose play in the wheel, and the paddle gear shift clicked up and down in a perfectly satisfying way. Again, this was the first time I had ever played a driving game that had paddles behind the steering wheel for shifting up or down.

The game had three courses and we spend the first couple of weeks mastering the Beginner course – “Big Forest.” We spent as much time and money as we could afford down at that snooker club. I even joined as a Member (£30) to save having to cough up each time just to go in. I don’t think I ever played a single game of Snooker in there. I was only there for the arcade machine.

Tell us what are your all time favourites?