This game is the only black and white game on this list. I think I’ve only ever seen this machine twice. It’s not the only ‘top-down’ game on the list though. Driving games don’t always have to be in 3D to be good fun to play. I think the only reason I started to play this one is because it was positioned to the right hand side of an Atari “Battlezone” cabinet. It was in a small local theme park that was located just down the road from my house. That combat tank game, with it’s cool ‘periscope step’ and incredible military style 3D vector graphics was a sensation back in the early 1980’s. So I took to playing a bit of Atari’s “Sprint 2” driving game whilst waiting for a turn on Atari’s “Battlezone.” They seemed to dominate the arcade I was in at the time. More than half of the cabinets in there were Atari games. 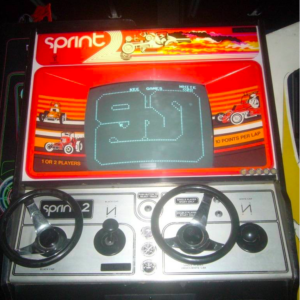 “Sprint 2” from Atari was pretty good, despite it being a top down game. You could play two players together at the same time. So that makes it the first multiplayer driving game I ever played. It also had a really loud loudspeaker on the cabinet, so driving around holding those big Atari steering wheels combined with a satisfying deep bass chip sound firing out at you. Yet again, it was a game that no-one was good at. Driving down the screen with the steering reversed confused pretty much everyone who played the game. You could also bang into your opponents and try to make them crash. That seemed like a pretty compelling game mechanic to me. There will be a few more arcade racing games like that further on down this list!

The game is also memorable as the first game I played that game you a rating of your performance at the end – which in my case was always ‘Rookie.’

Asking around, none of my friends knew what that meant. It was an American term. After a few weeks of wondering what it meant I had to ask my Dad to explain it to me. It really wasn’t a well known term at all back then.

See you next week for Part 3.