As the early home micro computers were pretty limited in terms of their graphical output, great driving games were thin on the ground. Games were mostly sold on cassette tape for around £5.95. But Commodore also produced a few game on ROM Cartridge. These games were pricey. They were a whopping £20! They came in big cardboard boxes rather than small plastic tape boxes.

There weren’t that many computer shops around in 1981. In fact, there were hardly any. Home computers were very very new. Those that were around were all independent businesses set up by passionate enthusiasts. We had to travel about half an hour to ours. It was called “Computer Kabin.” We discovered it was owned and run by the son of one of my primary school teachers, Jay Lazzarri.

Try Before You Buy

The shop featured games and peripherals for the Commodore VIC-20, the Sinclair Spectrum, and the Acorn BBC Model B. There was a long wooden tabletop on the right hand side of the shop, and each computer had a dedicated monitor next to it. New games were on shelves on the left hand side, and they would load up anything you were interested in, so you could try before you buy! Again, this was revolutionary retailing for the time!

Higher up above all the computers were the really expensive games. The Commodore cartridges. You didn’t get to see them much. Who else walked up to cough up £20 for a new game when you could get two for £10? You didn’t see them advertised in magazines, so all you had to go on was the big picture on the box!

“Road Race” got my attention from the moment I walked into that shop. The artwork looked dark and exciting. I was eager to give it a try. Rallying what looked like Ford Escort through a muddy and smoky looking Forest looked right up my street. 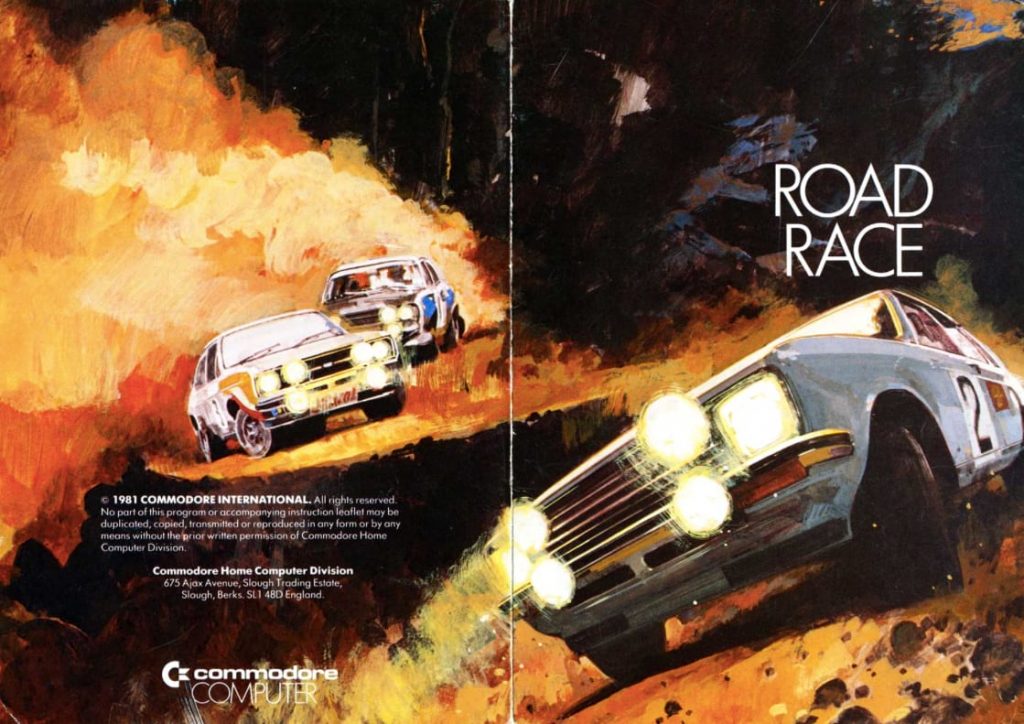 I never owned the game in the end. But my friend Dan did, and he got it for Christmas at the end of 1981. Dan was at the cutting edge of technology at my School. He was the first to talk about getting a computer for Christmas. I can remember laughing at him for that. Who would have had the space in their house to able to fit a computer inside?

Christmas arrived early at Dan’s house. He would get his presents really early, at the start of December. This meant that Christmas also came early for everyone who knew him. We’d be around his house all month long in the run-up playing with all his toys. Dan was the first person I knew to get a VIC-20. The first person to get a Joystick. He also the first person to own a ROM cartridge game.

“Road Race” was a clone of Atari’s black and white 1976 driving game “Night Driver.” There was no car on the screen, just a funny shaped bit of the bonnet. All you did was drive against the clock in between a scrolling set of cones. White in the arcade version, but blue on the VIC-20 version. Don’t go looking for this one on YouTube because it’s what we call today ‘a hard watch’ – it looks very simple and very basic. And it won’t help to explain how this game had me hooked for close to several months. 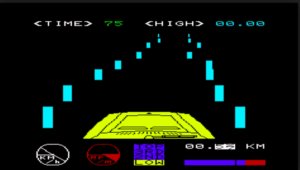 Most driving games over time have been pretty accessible. Most people know how to drive. You can usually see a car on screen, and after that it’s not too hard to work out what’s going on and what you have to do. But this game wasn’t one of those. It was probably the only VIC-20 game I ever played that was hard to control. It didn’t use the Joystick so it was strictly a keyboard affair.

You pressed the “I” key to start the car, you used the “A” and “D” keys to steer, and then you had to master using the “RETURN” key to accelerate whilst simultaneously shifting up through the gears using beige Function Keys to the right of the keyboard. As if driving wasn’t going to be hard enough and off putting for all the family as it is, but having to use the Function Keys was a real deal breaker. Few games ever used them, and for good reason too.

But it was 1982 and good games were thin on the ground. I became addicted to the game and ploughed hours and hours into it. There were only three television channels at the time back then, so having the VIC-20 was like having Netflix as well – and all to yourself.

I never had the flexibility in my fingers to learn the piano, but somehow I became an expert at VIC “Road Race” – after a month or so I could really play the game at an almost superhuman level of ability. I’d memorised nearly all of the tricky bends and was pretty sure I was able to ‘finish’ the entire game. That was unheard of back then, so if anyone ever told you they had completed a game, or completed an arcade game, then it was a surefire way to know they they were lying!

Was it a hit? Probably not. Did anyone else ever want to play it? Not that I can think of. But I loved it, and let’s be honest, that box artwork was pretty special. I’d want to play *that* game now I think…

See you next week for Part 4.