When I was at school those of us with home micro machines were split into two main camps – the Sinclair owners and the Commodore owners. Debate raged day in and day out as to whether the best games were to be found on the flimsy Sinclair ZX Spectrum or the mighty Commodore 64. I think my own allegiance is clear. 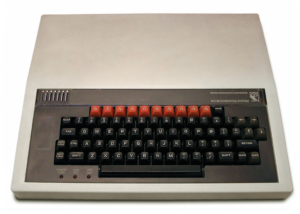 But if your Dad happened to be a schoolteacher, then you got to be part of a much smaller group, the BBC owners group. Nearly all of the BBC fans I knew had parents who were teachers, and mostly they were Maths Teachers! The only organised computer group at School was a BBC Owners Group and it was run by the Music Teacher. Whilst it looked like they were going to be discussing programming, we all knew once inside, they all wanted to copy games from each other!

The guy I walked to school with, David, had a BBC Model B for Christmas. He had the proper Monitor and even a twin disk drive for it. Better still, his Dad taught Maths (of course!) at the local Poly. So, not only did he have access to a ton of games purchased by the Maths Department at said local Poly (for ‘research purposes only’ of course!) but his Dad also copied most of them to floppy disk. Again, that’s what serious research is all about.

Being invited around to his house to play games was like being invited to join some sort of secret society.

The BBC Model B did have a reputation as being a bit of a ‘boffin’s machine’ (can you guess why?) but let’s be honest, the games that Acornsoft were putting out were streets ahead of the stuff that us lowly Commodore and Sinclair owners could get our hands on. To us, the words ‘arcade version‘ were often dirty words, leading us disappointingly to lukewarm representations of a great arcade game we’d maybe have played at a seaside arcade. But on the mighty BBC, these guys got the best home versions around of “Defender” “Galaxians” and “Scramble.” They were called  “Planetoid” , “Arcadians” and “Rocket Raid.”

I don’t have time to mention “Killer Gorilla” but it was the best micro version of “Donkey Kong” going. The only downside was that all the BBC joystick were those rubbish potentiometer ones, the ones that Dragon 32 owners also had to suffer with. They were rubbish. But for most games, it was mechanical keyboard ahoy. 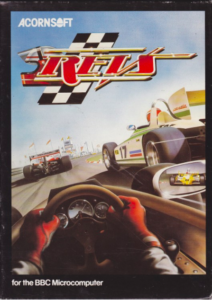 In early 1984 I went around to his house to see a new driving game I’d heard a lot about. It was called “Revs” and of course, was put out by Acornsoft. This was my first introduction to the work of legendary UK programmer Geoff Crammond. The year before he’d put out a Beeb flying game called “Aviator” but I wasn’t so interested in that.

Now…That’s What I Call The Hardest?

Looking back “Revs” continued the early 1980’s trend of trying to be The Hardest Game In The World. It was my first experience of playing a ‘real driving simulator’ experience. It also had a killer piece of artwork on the cover. And it wasn’t just me, I know countless other people who bought this game because they were wowed by the box art. The game was nigh on impossible. Like “Road Race” before it, you had to master steering, accelerating, and trying to do the gears. Most people gave up whilst being stuck in the Pit Lane. The idea was that you had to Qualify and then take part in a Race. But nearly everyone I know failed to complete even the Qualifying Lap. 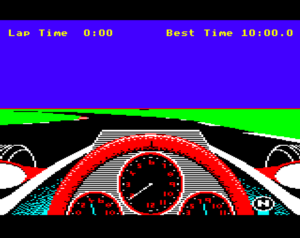 The visuals were astonishing for their time, no-one had yet seen an F1 cockpit display on screen. But by God it was rock hard. It was also the first racing game I ever played that had Hills in it. The track went up and down as you drove around Brands Hatch. After you’d seen that, there was no going back really.

Geoff Crammond continued with driving games, going on to develop the “Grand Prix” series of games for Microprose. Some people still rate the amount of stuff he managed to put into his software over some of the top tier games of today. And to see what he was able to do in Software-only on the early PC’s was quite incredible.

He remains one of my all-time heroes of game development. I was lucky enough to bump into him outside the ECTS trade show at London’s Olympia in 1995. I saw his exhibitor badge as he walked by me and being thrilled with excitement stepped into his path to introduce myself and shake his hand. He’s known for being a shy type of person and responded with a wonderfully uncomfortable, “Erm!” before stepping aside and getting into a nearby taxi! Oh well!

Here’s a link to a review of the Commodore 64 version of the game on the excellent www.zzap64.co.uk website:

It’s funny to read the comments of reviewer Gary Liddon,”this isn’t a game, it’s a simulation!”

Whilst you’re here, if you haven’t already please consider signing up to our Dangerous Driving Club.
See you next week for Part 6.