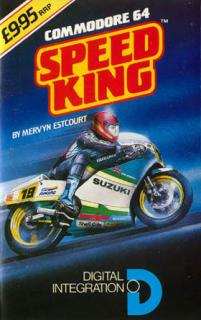 This was a little-known ‘sim’ motorbike racing game that a friend of mine lent me. Most of the games that are featured here tend to be ‘little known’ worldwide because not all of these titles were available to purchase globally. There was no Sinclair microcomputer market in the United States for example.

It was published by the mostly simulation publisher Digital Integration. They were based in Camberley,  Surrey in the UK. It was also home to a few other developers and publishers of the 8-bit home microcomputer era.

I remember this game well for three main reasons. Firstly, it featured a *very* fast sensation of speed for the time. A couple of simple visual tricks made this game feel incredibly quick and smooth.

Secondly, it was also the first game I’d ever seen that offered a ‘preview’ of each course. The premise here was that you could try and memorise the layout of each one the more times you watched it. In this preview, nothing else was drawn onscreen other than the track. It was incredibly slick and quick to watch.

Thirdly, it featured a little yellow mark on the back tyre of your bike to help give an illusion of the tyre rotating with speed. I think having a smooth framerate and a sense of speed was quite rare in these early home micro racing titles. “Speed King” wasn’t a 60fps game but for the time it most definitely felt like it.

I played this for a long time, and can still remember the “Swedish” track in my mind quite well to this day! Impressive! 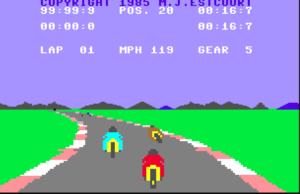 See you next week for Part 7.