Activision were a hot company during the Atari and Commodore era. From “Pitfall” to 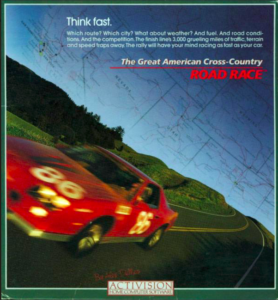 “Ghostbusters”, their stuff stood out on the shelf, in part due to the soft shell ‘video style’ boxes that they used. They advertised heavily in the UK and they really spearheaded the advance of more American titles into the European market.

Activision was formed when a bunch of programmers left Atari to form their own company seeking a better share of their profits from their work and greater creative freedom. This racing game was known amongst me and my friends as “G.A.C.C.R.R” as that’s what you saw as the game loaded. The title was too long to fit across one line of the TV screen on the Commodore 64. The game was available on the Atari 400 as well. But who knew anyone who had one of those?

Here’s some footage from the Commodore 64 version of “The Great American Cross-Country Road Race” : https://www.youtube.com/watch?v=SaE77-A4ZMo 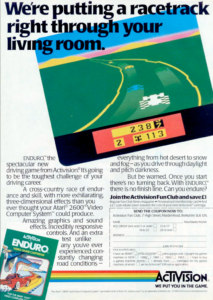 It’s an improved version of earlier Atari game “Enduro” although out of all of the people I knew who owned a VCS system, none of them had this game. “Enduro” was the first game that featured both day and night, as well as 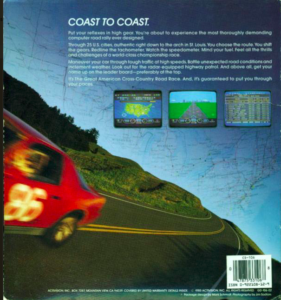 white, and voila, you had a snow level.

Get Out And Push?

It’s clear that the game concept for “The Great American Cross-Country Road Race” was inspired by both the real-life “Cannonball Run” and the earlier “Enduro” cartridge game. It not only featured being chased by the cops, you also had to make sure you stopped for petrol. If you ran out, you had to push the car along the side of the road by tapping the fire button repeatedly. It wasn’t a popular game, but I quite enjoyed it. Also,all the friend I knew who owned a Quickshot II joystick just used the ‘auto fire’ sliding switch to miraculously ‘push’ the car along the road at close to normal in-game driving speed.

I think I liked it because it had speed, traffic, crashes and police cars in in. Funny that.

See you next week for Part 8.