In 1984 a local disused caravan park and small theme park re-opened under new owners. They had a few rides and a small video arcade. This was perfect for me and throughout the Summer of 1984 and 1985 I went down there a lot to play their machines. Not all of the machines were genuine, and most were counterfeit machines where the names of each game had been subtly changed. This top down ‘battle racer’ machine turned up one week. I’d never heard of it. Or seen it. It turned out to be something of a hidden gem. 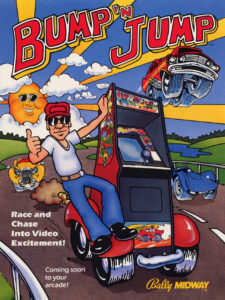 Don’t we need more racing and chasing in this world?

Bump N Jump is a fast action top down racing game with a couple of cool features. Firstly, rather than drive a race car, you drove a red wobbling buggy. Secondly, the player drove through different changing ‘seasons’ highlighted by a change of colour scheme. You could make the car jump outrageously high to avoid your opponents.  Thirdly, you could ‘take them down’ by knocking them into the side walls or by landing on them. Later stages of the game required a careful use of the Jump Button. Sections of water had to be jumped.  The car had to be steered in the air to either land on a section of Island before jumping again, or move all the way over to one side to land on a smaller strip of track.

I loved this game, and played it a lot. I think the idea of smashing other drivers off the road must have stuck in my brain somehow that year. Taking them down was quite hard to do but good fun. And the huge jumping was brilliant fun.

Here’s a link with shows the coin-op game in action: https://www.youtube.com/watch?v=c2QpM5uoSlk 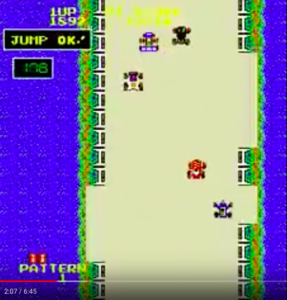 A direct influence on Burnout 2. See why?

Around seventeen years later, this game directly influenced the development of  the PlayStation 2 title “Burnout 2 Point of Impact” that I directed that year. The onscreen HUD message that reminds the Player that the Boost is full “Boost OK” came directly from remembering this old arcade game. The jump message  in the Data East game says “Jump OK!” so I thought a similar phrase would fit in the same style. 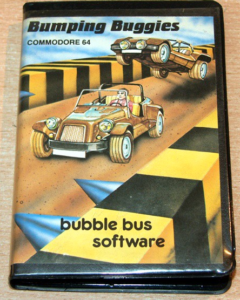 There was also a really cracking version of this game for the Commodore 64 put out by Bubble Bus Software. It had a catchier name “Bumping Buggies” and it was pretty faithful version of the arcade original. I picked it up in a convenience store for a bargain price of £1.99 and got many many hours of play out of it.

Here’s a link showing some footage of that little known Commodore 64 version:

If you enjoyed reading this story and would like to see more, please consider signing up to our Dangerous Driving Club.