Some people can remember exactly where they were when significant world events happened. I’ve always had a good memory so major events are still really clear in my mind. but I can also seem to remember just exactly where I was when I saw certain arcade games for the first time also. Atari’s “TX-1” is a good example of this. I can clearly recall it was on a hot day in August 1985 and I was upstairs at “Mr.B’s Golden Mile” amusement arcade in Blackpool, England.

A Day At The Arcades

I used to spend about one day a year, two at most, back then visiting seaside arcades. It was THE day of the year for me to spend a whole day carrying a bag full of change around having a credit on whatever I wanted to play. You’d see the latest games, games you’d only have heard of third hand and wanted to try as well as finding older machines tucked away in dark corners. 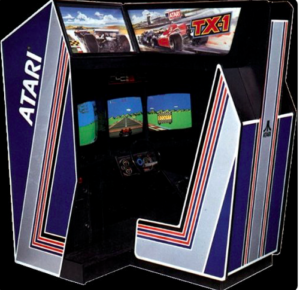 “TX-1” is a bit of an oddity really. It was the first three – screen arcade machine I’d ever seen. That made it really stand out. And it had really good marquee artwork as well. (The marquee is the illuminated plastic bit that sits at the top of the cabinet and tells you what the game is.)

Here’s some emulated footage of the game in widescreen: https://www.youtube.com/watch?v=dCx5oHZqWVw

You didn’t get to see computer games or arcade games on TV back then. But earlier that year there had been a computer based drama on BBC One on a Sunday night. The story revolved around corporate espionage of some sort. And briefly, very briefly, this three screen driving game featured in one of the scenes. And interestingly to me, it showed one of the “hacker” characters in the show finishing the game and reaching the mysterious “GOAL” screen at the end.

I was nearing the end of a long day in the seaside arcade. I’d eaten nothing more than a small bag of chips and drank nothing apart from a few cans of Coke. All I’d heard was bleeps and blops, and the sounds of fruit machine spitting out coins all day. As if one floor of amusement machines wasn’t enough, this particular one had two floors. So I was upstairs looking at an odd mix of coin pushing machines, and some older space shooting games. I was always on the lookout in hope of finding something off the beaten path – maybe a mint condition “Gravitar” tucked away or a legitimate “Phoenix” cabinet complete with original cabinet artwork?

Instead, there was a working “TX-1” machine. It’s not quite the Holy Grail of arcade games, but I’ve always felt it was hard to find. Three things stood out. Firstly, a three-screen driving game is amazing. Highly recommended if you happen to have three monitors knocking around. Secondly,  it was the first game I’d ever seen that had tunnels in it. They weren’t big or long, but there they were. Thirdly, the steering felt amazing. And that’s because the machine had force feedback steering. 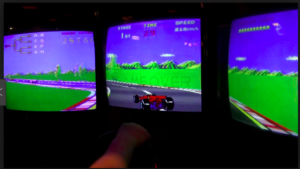 Any aficionado of the scene will have a thing for decent force feedback. It can really add a lot to what can be an average game. “TX-1” is a good example, and Sega’s “Daytona USA” is probably another (!) Sadly though, force feedback and seaside arcades don’t mix well. I struggled to do well at the game as the steering on this machine was a bit wobbly and busted. My car kept pulling to one side. Therefore, I had discovered why this machine was hidden away upstairs at the back.

A few months later I saw an ad in “Personal Computer Games” magazine and it featured a 3D driving game for the Atari 800 from English Software. It was called “Elektra Glide” and looked to me a game heavily inspired by “TX-1” – probably the first home 3D game that had tunnels in it.

Here’s some footage of that game in action: https://www.youtube.com/watch?v=4JxagpNL9Tw

Many years later I ended up working at the same company as the guy who coded it. His name was Adam Billyard and he was the Chief Technical guy at Criterion Software – the sister company of what would become Criterion Games.