“Le Mans” for the Commodore 64 is another little known, but brilliant arcade racing game.

If you’ve been reading these articles since the start, then you’ll know that I was a bit of a sucker for a good piece of box artwork back in the early days of home microcomputers. This game, another Commodore ROM cartridge title, this time for the Commodore 64 is another example. 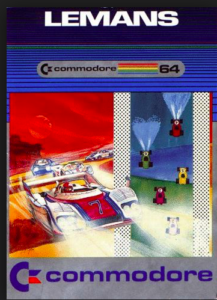 That box artwork just looked really cool to me. In fact, it still does. It sets the scene and makes me excited to try the game. It shows a cool Le Mans racing car, at what looks like sunset leading a pack of other racers. And that car almost  has that cool Martini livery that made any race car look amazing back then. Who needs “Forza Motorsport 7” and it’s near photo-realistic 4K HDR visuals when the humble Commodore 64 offered all that and much more back in 1982! I wonder how many members of Forza development studio Turn 10 weren’t even born by that date!

Those were days my friend

I first saw this game at a microcomputer show in 1983. It was held on a very rainy weekend in my hometown of Stoke-on-Trent. The Show was being held at an old ballroom called The Kings Hall. Word soon got around at my School that it was happening. It had been well advertised ahead of time in our local newspaper.

I was one of the first people through the doors at 9AM prompt the following Saturday. It was a big hall full of computer retailers with small flimsy looking stalls all with one or two portable tellies set up on them. There were green felt tables stacked up with all of the game cassettes they were hoping to sell.

I went to a few microcomputer Shows back then. It was mostly a chance to check out the games on systems you didn’t own and to play something new. I think this was just before I actually got a Commodore 64 for myself so the machine felt powerful, mysterious and new to me. The ROM cartridges for the 64 came in tall but thin boxes, unlike their massive VIC-20 counterparts. Two games stood out to me. The first was Andrew Spencer’s incredible “International Soccer” (which I think was a lot of people’s ‘first time they saw a 64 game running experience) and the second was this one, LeMans. 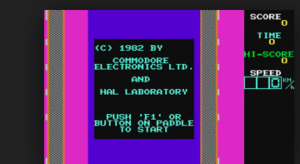 Commodore. Like VIC “Road Race” before it, this one was made by a then unknown in the West Japanese development company called HAL Laboratory. Back then HAL only had five staff – and one of them was Satoru Iwata – who would later go on to run Nintendo Co. Ltd. in Japan.

The game was running on a small stand on the far left hand side of the Hall, a poor stand position pushed right up against the Stage which dominated the far end of the room. The stand was run by one guy. His stand had a Commodore 64, a telly and only a handful of games. There wasn’t much passing trade so he sat there reading a newspaper. He seemed more than happy for me to sit and play his games all day. So that’s what I did, for pretty much the entire day.

Playing a VIC cartridge game back then was quite exotic. A bit like driving a car with the top down. But playing a Commodore 64 cartridge game was really exotic at that time. I only knew one person who actually owned the machine, and he didn’t have any cartridges. This was almost outrageous behaviour. I could not for the life of me understand why there wasn’t a long line forming by this very stand, with gamers from all over Staffordshire lining up to try this incredible top down racing game on Commodore’s new wonder machine.

Take a look at the game running here : https://www.youtube.com/watch?v=7at-bpfidhk

It felt outrageous because this was a driving games that required paddles. I didn’t even know Commodore made Paddles, but they did and I was holding one in my hand, steering a car with one. Paddles were more of an Atari thing. A VCS thing, not a Commodore 64 thing. After all, we were almost sworn enemies back then. And a driving game that needed Paddles? This was lunacy, sheer arcade lunacy. And probably why no-one has heard of “Le Mans.” 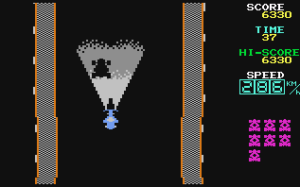 I thought “Le Mans” was awesome. It had a night stage, where the headlights of you car illuminated other cars on the track. And then it had a snow and ice stage. All mind blowing ideas for a 1982 video game. It had a nice animation when you wrecked your car as well. It was quite a nod to Sega’s “SEGA Turbo” coin-op of the time but lacked the pseudo 3D effect. But to me it was brilliant and besides I’d never heard of or seen “SEGA Turbo” at the time anyway. The fact that it needed Paddles pretty much ensured that few people have ever heard of the game or played it.

I’ve never met anyone else who owned it. I do. I bought my copy of “Le Mans” off eBay in 2001. Towards the end of my time with the Commodore 64, I got hold of a cracked copy of the game. You could play with joystick or keys. If you really concentrated you could stick to the right hand side of the course – for some reason any 1982 videogame recreation of the French circuit had to be mostly straights – and only by making small movements you could pretty much stay in the game until your fingers lost all feeling in them. Which I actually did.

To Be This Good Takes Ages

“Le Mans”  always struck me as a very original computer game until two years later when I found myself in a mountain cafe on a ski slope in Northern Italy. In the corner was a Sega branded version of the game. I knew it then as “Dino Ferrari” but the internet tells me that was the name for the pirated version of the 1979 “Monaco GP” game – the forerunner to the incredible “Super Monaco GP” that would blow my mind many years later. Outside, the weather was freezing, but inside the cappucino flowed and so did all my Italian Lire.

Straight into the coin slot of that machine!