Pitstop II was one of the early 8-bit racing greats.

In 2018, it appears that we have lost a sub-genre or style of  game 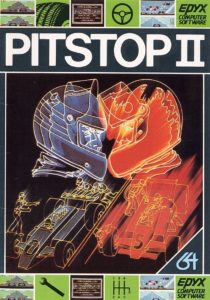 . One that all home gamers used to know well, but that now seems to have passed us all by. And that’s the genre known as ‘joystick breakers’ – those games that were guaranteed to push you to the physical limit. Beyond which only lay a broken controller in the heat of battle, and the satisfaction gained knowing that you had truly ‘given it your best’ up to that point.

During the mid 1980’s this genre was dominated by clones of Konami’s excellent ‘Track and Field’ arcade game. Whether it was Ocean’s Daley Thompson branded “Decathlon” title for ZX Spectrum owners or Activision’s stunning “Decathlon” for C64 owners – both were pretty much a given to lead to the purchase of a new joystick. This was how the guys are Kempston or Konix must have gotten rich.

But it wasn’t just athletics based games that could lead to a punishing joystick workout. It’s true, there was another. And Epyx’s stunning “Pitstop” sequel was just the game to do it. You can read my earlier piece on its prequel here. It’s safe to say that “Pitstop II” came out of nowhere. It felt like I was the only person in the world who knew of the first game. But this game came to dominate the summer of 1985 and exploded into the pages of the second issue of Newsfield’s excellent “Zzap!64” magazine with a whopping 89% review and a confident “Sizzler” status awarded.

I received the game as one of three games for my fifteenth birthday. It came the same day my subscription copy of Zzap! 64 arrived in the post. Then, I eagerly read the review whilst wolfing down my breakfast and loading the game up on cassette before going to School. After the long load, and being late for School me and my Mum barely had the chance to play for a minute before having to leave. In my excitement we even left the machine powered on and paused as I planned to run home at lunchtime and squeeze a quick game session in. 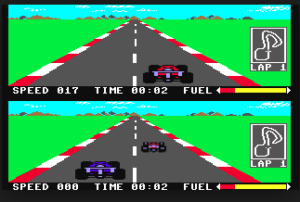 This was sort of the “Pole Position” game I’d been looking for. The graphics were amazing, the sense of speed incredible and best of all – it featured 2 player split screen play. I think 2P gaming is pretty much the epicentre of gaming really. Nothing feels better than the heat of competition between two players sitting right next to each other playing “Pitstop II”

Sure, it didn’t have a lot of tracks but playing the game led to a demanding workout on the joystick. You’d have to really push hard to the left or to the right to maintain that corner speed. Victories were hard fought and whilst single player was pretty great, the game was THE 2P game of that year. My mate Kempsey was a willing opponent and we spent pretty much the entire Summer of 1985 playing this game. The joysticks put the to the test were the Kempston Competition Pro and the older but reliable Quickshot II. I’d moved on from the Quickshot so tended to favour the Kempston. It was the first time I encountered the complex layout of Sebring in the USA. And I still hate that track with a passion to this day when encountering it in bouts of “Forza Motorsport 7.”

Have a look at the game in motion here:

It’s probably hard to understand today, but a game like “Pitstop II” really was a revelation. One of those few games were the sequel was way way better than the original. I’ve still got that joystick too!