As I sit down to write about my memories of Namco’s 1987 sit-down coin-op game,I can quite clearly recall a sunny afternoon in Blackpool. It must have been early Summer in 1988. Before I start writing these pieces, I usually watch a few videos of each game on YouTube to take a look at each one. Some of these games I’ve not seeing running in over 25 years.

If you’re someone who had grown up on the incredible games and powerful hardware commonly available today, then I think you’d be perfectly justified in thinking that I must be mad to be able talk about some of these games in such glowing terms. I must admit that some of them are quite hard to look back on. A couple of times I have wondered how on earth I could have been impressed by them.
But that is the benefit of hindsight. And, as I’ve written before, each of these games was often some sort of ‘technical marvel’ in terms of doing what it was doing at that particular point in time. 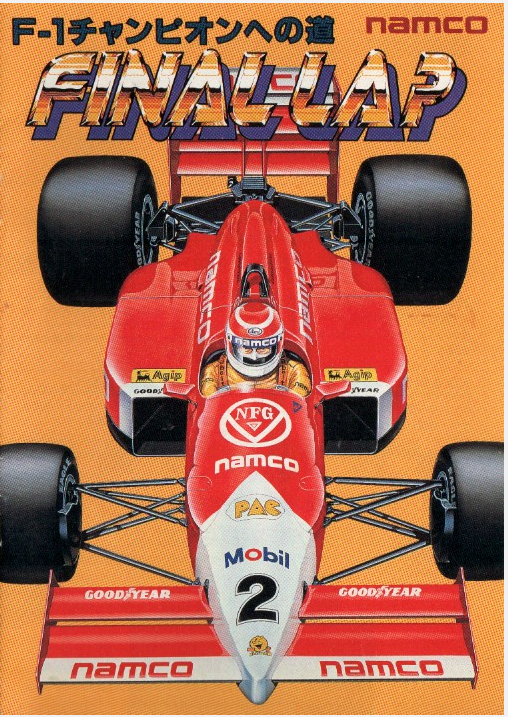 Looking back at this game “Final Lap” was pretty much an updated version of Namco’s earlier “Pole Position.” Things had moved on quite a bit in the five years since that game had appeared. But those improvements were mainly on the 2D side of things. Most games had more colours. In addition they had more animation and  more characters on screen. They scrolled better. Plus they sounded better. Things hadn’t changed much at all on the 3D side of things – where improvements came along much more slowly and were harder fought. This was a full year before Atari changed everything with “Hard Drivin‘ and a full six years before Namco opted for 3D polygons in “Driver’s Eyes” (but more about them later on.)

But “Final Lap” was a new 3D driving game. And it was made by Namco. It had a big sleek, and some would say, sexy cabinet. The display was big, the wheel felt quite expensive and it was very very popular. And then there was the graphics. Namco games *always* looked the part. So here was a sleeker version of “Pole Position” but this time there were real licensed cars and real billboard adverts. And it felt fast and great to drive. 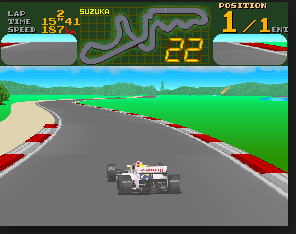 What stood out to me then, and what stands out for me now, is how good that player car looks. It was probably my first glimpse at seeing *anything* vaguely photo-realistic in an arcade. There was the 1987 Williams Honda complete with accurate livery. And there was the yellow Team Lotus Honda. People went and played that game just to drive those iconic cars. Yes, they did corner ‘a bit funny’ and yes, the machine was always nearly set to be quite hard to take your money quickly, but there was something quite special about “Final Lap“. 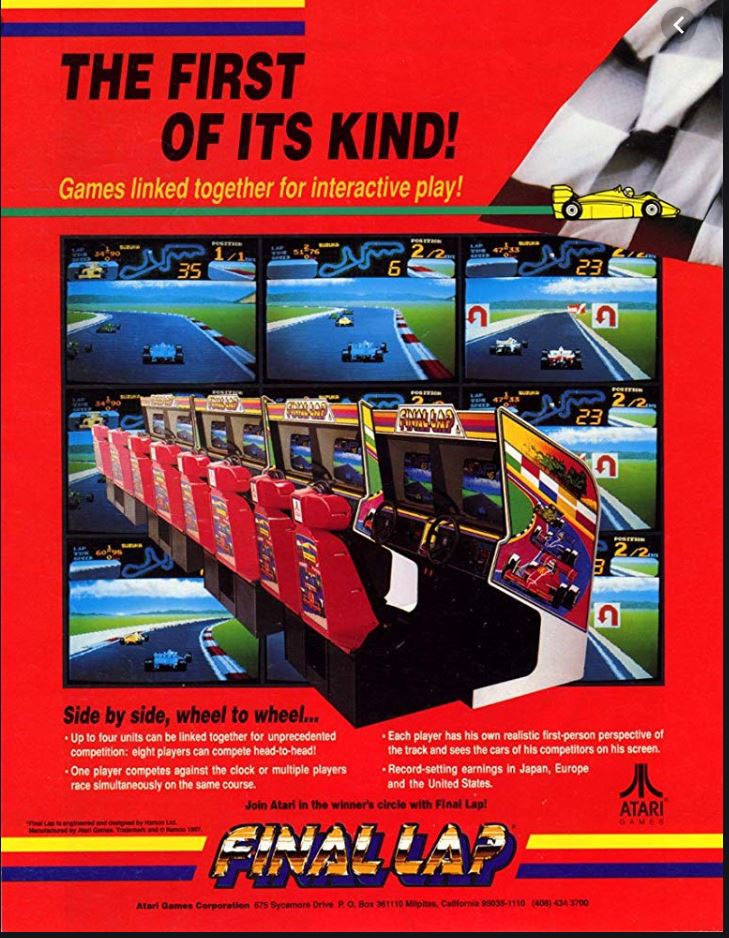 I Could Be So Good For You

It was as simple as this. You rarely saw that game in its solo configuration. It was nearly always in the 2P side by side “Final Lap Twin” configuration. Wherever you played it this game was a great ‘sit down and see who will win’ game.
If you were ever lucky enough to go to one of the old ATEI amusement trade shows at London’s Earl’s Court then you’d also be lucky enough to see a car park full of Rolls Royces with private number plates.
There was also a lot of men wearing sheepskin coats paying for their lunch with pound coins carried around in one of those green cloth money sacks that you only get at the Bank.  If you ever wondered how they got to be so rich, well, it was thanks to you and me dropping coin after coin after coin into 2P games like this one.

For a very short time in my life, I worked in the coin-op “trade” and got to see just how much those machines cost.  And they were big money indeed.  No change from less than £25,000 at the time for a sit down “driving twin” and that was often at the low-end.  Those guys were making out like bandits, literally, the minute those machines ran into profit. And that usually didn’t take long. A hot new game in a prime position on a busy Bank Holiday weekend? The easiest money in the world. But getting one of those machines unloaded off a lorry in one piece? The hardest money in the world. At a pound a play, it would soon start earning its keep. Then it was just a money making machine for years and years and years. Provided it wasn’t smashed to pieces of course.
It was never the best driving game in the world. If I played it today I doubt it could ever make the same initial impression as it did to me back on that summer afternoon. But it certainly did have its moment in the limelight. But little did we know what changes lay around the next corner…