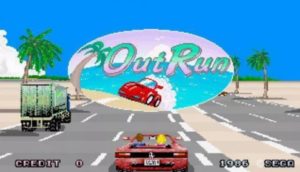 It’s fair to say that Sega’s “OutRun” was more influential to developers than Namco’s “Pole Position” was. It had licensed cars. There were  hills. You had choice of routes and you could pick the music that played in-game before you started. And wonderful though it was, it never had a proper sequel. Yu Suzuki had already moved on, to do other things. To push the 3D envelope further. He followed up arcade racing game “OutRun” with “Super Hang On” in 1986.  In other words, that game was simply “OutRun on motorbike.” The whole world would be turned upside down with his next game, the phenomenal “Afterburner” in 1987. 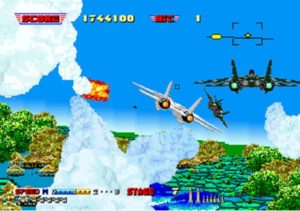 If you thought driving in an open top Ferrari in rolling hills looked impressive, then your jaw was really going to drop when you saw “Afterburner.”  That game showed a fighter jet flying through the fastest 3D landscape the world had ever seen. (It’s the game you see John Connor playing in “The Galleria” in the 1991 movie  “Terminator 2 Judgment Day“) Sega were really onto something with their “Super Scaler” technology. “Afterburner” was made using a new piece of Sega hardware called “The X Board.” I was always eagerly awaiting a follow-up to “OutRun” and it wasn’t exactly easy to find out about what was happening in the arcade world at the time. But then one day, a friend told me they had played ‘a new Sega arcade racing game” in a local pub and that “it had an amazing feeling of driving” and “looked better than Afterburner.” Was this the “OutRun” sequel I was hankering after? 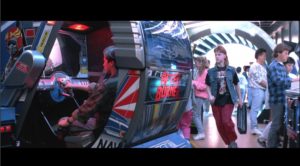 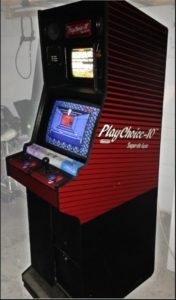 I was too young to be able to legally drink in pubs in 1988, but a few of my friends had suddenly become very interesting in sneaking into them. With the sniff of a new AM2 game in the vicinity, all of a sudden so was I. One Friday evening a group of us ventured off to said local hostelry in search of a good time. One of my friends was the first to pass the driving test, and his parents had kindly lent him use of their family car for the night. My friends were dreaming of wine, women and song. Me, well I was just going to play the arcade racing game. The pub was rammed, really rammed. But I found not one but two coin-ops located on the far right hand side of the bar. One of the cabinets was a Nintendo “Play Choice 10” machine – which was a huge arcade sized NES with ten carts inside and you could play until the time ran out. For someone like me, it was a nice way to take a look at other NES games I’d not seen, but the timer felt a bit cheap to me. You’d just get to the first swimming level on “Super Mario Bros.” and bang! the time ran out. Plus, why would I pay 50p to play on hardware I had back at home, when I could be trying out a new Yu-Suzuki game!

That game was “Power Drift.” It was running on an entirely new Sega hardware board – the “Y Board” and it was the first kart racing game I’d ever seen. It was also the first game I’d ever seen showing an aerial fly-around of each stage during the attract mode. It had a choice of characters, the go-karts looked like souped up hot rods. Yep, so far so good. Not having too much money on me, I think I spent the first 45mins carefully watching the attract sequence. I wasn’t one to instantly waste my precious first credit and fluff the game because I wasn’t sure what was happening. 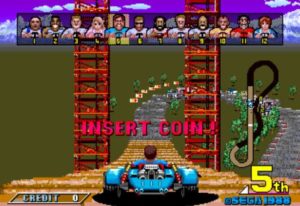 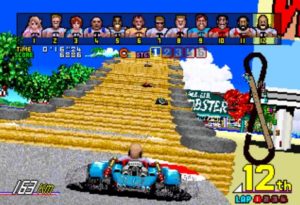 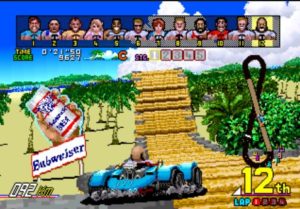 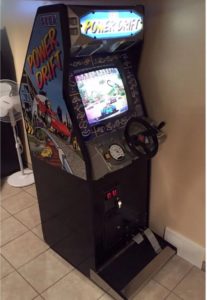 The game had wild stages, each one looked more like a rollercoaster in a theme park than a real kart track. It was fast, and almost too confusing to play for an arcade racing game. I think my abiding memory of playing it was experiencing the force feedback effects on the steering wheel. I’d never felt anything like it. Every knock and collision was recreated inside the cabinet. Again, this effect is completely normal in today’s gaming world but back then this was really unique. It was hard to get good at the game on the first few plays.  You really had to concentrate on learning the courses, and my progress wasn’t helped by my slightly intoxicated friends trying to follow along and point at the screen ‘what’s that?’ and ‘what’s that mean?’ every few seconds.

Bad For Your Health

At one point someone spilled a drink down the front of the cabinet. Shortly after that  someone else stubbed out a cigarette on the top of the screen! My skills didn’t improve when my left foot kept sticking to the floor.  I had to wave away cigarette smoke with my left hand to keep a clear view of the screen! Looking back, it hasn’t aged well and has never been held in the highest regard by fans. But it was influential to a few developers. The very next year, Microprose released arcade racing game “Stunt Car Racer” by veteran Acornsoft programmer Geoff Crammond (he of “Revs” fame – see earlier posts!) and that game, although different, was most definitely inspired by “Power Drift.“
So why else is this game important? Well, I think it was the first time I ever heard the term “drift.”  Therefore, this was a term that would come to dominate my later working life…
Take a look at the game in action by clicking on this link.
Whilst you’re here, if you haven’t already please consider signing up to our Dangerous Driving Club
– we promise we’ll make it worth your while. If you love arcade racing games, then that’s great! because we do too!
Love0 Share Tweet Share 0 Share Pin