Namco’s wonderful “Winning Run” made it into UK arcades in early 1989. And 1989 was shaping up to be a banner year in my life.  On the radio in England that summer we had  “Ride On Time” by Black Box, Madonna’s “Like A Prayer” and “Back To Life” by Soul II Soul. The big movies of the year were Tim Burton’s “Batman” starring Michael Keaton and the third “Indiana Jones” movie. John Candy starred as “Uncle Buck” and James Cameron released his epic underwater action movie “The Abyss.”

A Winning Run to Blackpool

It was also the dawn of a new age in arcade hardware as well. Each Summer I got to make a pilgrimage to the Northern Mecca of Amusement Machines, Blackpool. The sun always seemed to shine. The streets were always packed. I easily spent  the whole day going from one amusement arcade to the next. To a seasoned arcade fan such as myself, a single day could never be enough. I could have quite happily stayed in one place and attempted to play every single machine they had.

You also had to have your wits about you. Many machines were in poor condition, especially driving games. There would be a lot of busted steering wheels, and stuck pedals. It was a case of ‘buyer beware’ in those days. Namco driving machines seemed recent and they were often in decent nick compared to many others.

Writing these stories can take ages. I’ve spent far more time than I should have working out which games should be featured on the list, and which ones definitely shouldn’t be. And then I agonise over each one. And go back to the list and try to frantically re-order the list. I can really clearly remember playing each and every machine as well, even down to how well I did, which track I played and whether I played with the gears set to ‘automatic’ or ‘manual.’

So to set the scene, it was around May of 1989 that I spent a full day trawling around the many varied amusement arcades of Blackpool. Fifteen fine English pounds changed into twenty pence pieces and carried in a special green Bank bag can certainly be made to last a very long time. Especially so if you like to watch the Attract Mode of each game several times before you play. It was around three in the afternoon when I set eyes on a machine that would pretty much change my life from that very moment. And that machine was Namco’s “Winning Run.”

Now, before you all leave this page and dash off to watch some footage of this game on YouTube – I’ll let you know that the game doesn’t stand up well.

Here’s a link to the attract mode of “Winning Run” because I know most of you simply can’t be trusted! https://www.youtube.com/watch?v=CQv01cLCHQ0

Namco’s “Winning Run” was far from being the ‘best game of 1989’ nor was it the most lucrative. In fact, you could try and casually drop in a reference to it amongst a group of modern racing game developers, and most people have probably never heard of it.

There was no one even playing it either. It was sitting there in the middle aisle of a very busy arcade, untouched and unloved. And it was a whopping 50p per play so that ruled out most casual passing players as well.

For 50 pence it would really have to be amazing to justify such a frivolous investment!

This game was running on incredible new state of the art hardware. It was known as Namco System 21, and known internally as ‘the polygonizer.’ It used 3D shaded polygons to draw the graphics. Now, I was no stranger to polygons back then – I’d seen them drawn on my friends 16-bit home computers at framerates of ONE or TWO frames per second. And we all knew that these truly were ‘the future of graphics’ – but I’d never seen them move so quickly as “Winning Run” was drawing them in realtime. This machine looked like something you’d see on television on  BBC One on a Thursday night. This was real “Tomorrow’s World” type stuff. This was 60,000 polygons a second  – and in case you haven’t looked it up yet, this was a Namco F1 ‘simulation’ game. Nowadays, we have to use the word simulation very loosely, but back then the rule pretty much was ‘if it has a steering wheel on it, then yes, it’s a fully accurate simulation of driving.” 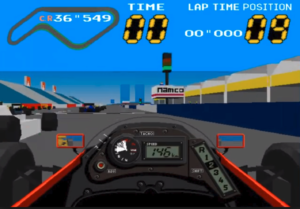 If you’re looking up “Winning Run” on YouTube then, all the direct captures simply don’t do the game any justice. Look for the video of the guy playing like an expert on his home owned machine. That’s the only one that hints at how good the sound was on this game. I clearly remember being blown away at the 3D lettering that made up the game’s logo and how they appeared and tumbled off the screen. Yes, I was even amazed at how The Logo appeared on the Title Screen?
It truly was non-stop entertainment back then! Non-stop.
This was the first fast 3D driving game I’d ever seen. No more manipulation of 2D sprites to create a three dimensional ‘effect’ – this was actual polygons. And for a while I must admit to really expecting that ALL games were going to look like this. That every game world was going to be made up of brightly coloured blocks. That every character was going to have a square head and that hands were going to be big rectangle. 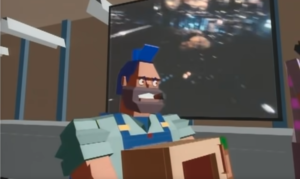 I think we can safely place the blame there at the door of the people who made the “Money For Nothing” video for Dire Straits as those were the first CG characters we’d seen a few years earlier!

Namco’s “Winning Run” really did blow my mind. It really felt like a new sort of experience, and that driving a virtual car was somehow ‘new’ all over again. This was an entirely new game world to experience. Sitting down to play the game truly felt like interacting with some incredibly state of the art computer hardware from the future. Like most arcade driving games though, it was obviously set to ‘ROCK HARD’ on the DIP settings so 50p got you a qualifying lap and then a very quick race. So the game was influential not just because it was a new type of experience but because for a few of us who played it, it sort of felt like a peek into another world. A world which was somehow just around the corner. And a world which we felt was going to change…..well, everything.
Love0 Share Tweet Share 0 Share Pin